I just came across the National Snow and Ice Data Center (NSIDC) “monthly highlights” article for April 2013 (Glimpses of sea ice past), which turned out to be a rather more interesting story than it appeared at first glance.

The article chronicles the details of how NSIDC technicians pieced together photos taken by the Nimbus 1 satellite between August 28 and September 23, 1964 – of both the Arctic and the Antarctic – to create an estimate of sea ice extent at September 1964 for both regions. For the Arctic, this was the yearly minimum; for the Antarctic, the yearly maximum.

NSIDC scientist Walt Meier was part of this effort and he and colleagues Gallaher and Campbell recently published their findings in the journal The Cryosphere (Meier et al. 2013). For the Arctic estimate, they had to add in data from Alaskan and Russian sea ice charts because the 1964 satellite data was not complete. This means the ice extent figure they came up with is not a true ‘satellite only’ figure but a composite one.

One of the things they did in their analysis was to place the 1964 value on a graph of the more recent 1979-2012 data, which really helps put it into perspective (see Fig. 1 below). 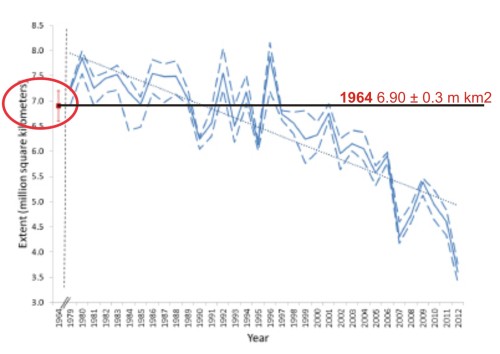 [What does this have to do with polar bears? Not much, really – although the minimum at September 1964 did follow the winter of 1964. That winter, in the eastern Beaufort (discussed previously here), heavy sea ice buildup caused dramatic declines in ringed seal pups (Stirling and Lunn 1997:178). So 1964 just happens to be the first year that we know of that extraordinary declines in eastern Beaufort ringed seals and/or polar bears took place due to cold winters and heavy spring shorefast ice (1964, 1974, 1984, 1992, and 2004 – the 2004 event is discussed briefly here). Beyond that, as I’ve pointed out before (here and here), the varying amounts of sea ice left in September have little to no overall impact on polar bears.]

“Overall the, the 1964 estimate is reasonably consistent with the 1979-2000 conditions, with the 1964 estimate falling within the range of extents during the passive microwave era (Fig. 7). This suggests that September extent in the Arctic may have been generally stable through the 1960s and early 1970s, though more years of data are need to confirm this.” [my bold]

Odd that Meier et al. would conclude “stability” through the 60s and 70s on the basis of one data point, given how remarkably variable sea ice has been since 1979. Because it wasn’t higher than 1979? They don’t say.

Nevertheless, they continue with this remarkable caveat:

“On the other hand, the estimate is considerably lower than form the UK Hadley Centre (Rayner et al. 2003); even after adjustments to be consistent with the passive microwave record (Meier et al. 2012), the extent of 8.28 million km2 is much higher than the estimate from Nimbus I. This may reflect bias in the Hadley estimates or limitations in the ability to detect the ice edge in Nimbus I imagery.” [my bold]

Interestingly enough, this disparity between the Hadley Centre estimate – a number now ensconced in the peer-reviewed literature – was not deemed worthy of mention in their formal conclusions. Instead, they focus on the finding that “1964 Antarctic ice extent is likely higher than any year observed from 1972 to 2012.”

This means that any reader who examines only the abstract and conclusions of this paper would fail to discover that the Meier et al. estimate for September 1964 Arctic ice extent is significantly lower than the published Hadley Centre estimate, which has undoubtedly been used by other researchers in published work. In addition, since the NSIDC ‘highlights’ article fails to mention this particular fact, any reader perusing only the NSIDC article would also miss this pertinent detail. 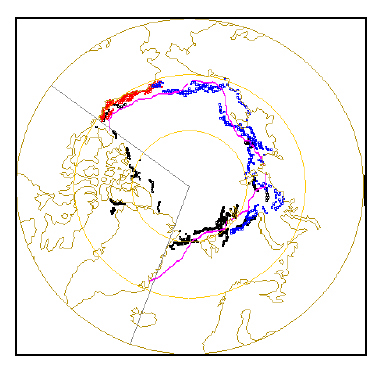 Figure 2. This is Fig. 6 from the Meier et al. 2013 paper. It shows the September 1964 Arctic sea ice edge pieced together from data from Nimbus I (black dots) and ice charts from Alaska (red dots) and Russia (blue). The pink line is the 1979-2000 median ice edge determined from NSIDC microwave data. The straight grey lines indicate the area they had to fill in from 1979-2000 data.