Posted on November 19, 2014 | Comments Off on Polar bear researchers knew S Beaufort population continued to increase up to 2012

Why did the Southern Beaufort polar bear population survey stop in 2010? It’s clear that the recently-published and widely-hyped new study stopped before the population rebound from a known decline was complete. 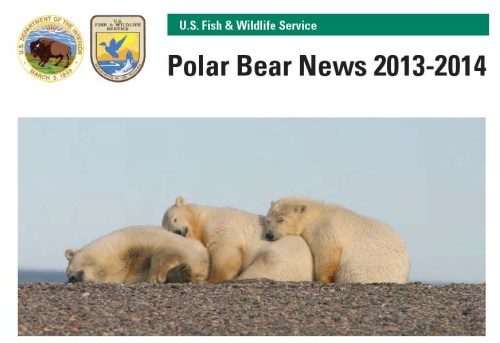 The researchers of the recently-published paper knew before starting their mark-recapture study in 2007 that the population decline had taken place. They also knew why the numbers dropped and that previous declines, caused by similar conditions, had been followed by a full recovery.

Did they really think a full recovery in population numbers was possible in only four years, when cubs born in 2007 would not yet have been old enough to reproduce?

In fact, a US Fish and Wildlife Service (USFWS) fall survey of Southern Beaufort polar bears in 2012 found numbers were higher than they had been in a decade.

To recap, the new paper (Bromaghin et al. 2015 ) took numbers from previous studies that revealed a statistically insignificant decline from 2001-2006 and formulated a new kind of model that suggested the decline had actually been more severe, between 25-50%. The only new data reported was collected between 2007 and 2010 (details here).

Survival of polar bears started to improve markedly by 2007 (a year of very low summer sea ice) and the population had recovered by 2010 to ~900 (range 606-1,212). The authors looked, but found no correlation of the decline with summer sea ice conditions as predicted by the IUCN Polar Bear Specialist Group (PBSG) earlier this year.

However, the USFWS reported in their 2013/2014 Polar Bear Newsletter [pdf here, pg. 17, lower right] that their fall aerial survey results showed that in 2012 the population was “high” compared to previous years and that bears were in “average” condition.

“The number of polar bears observed in 2012 was high relative to similar surveys conducted over the past decade. Body condition appeared relatively normal for this time of year with most bears reported to be in average body condition.”

Why would the authors of the 2014 paper cherry-pick their end dates, when they had to have known when they submitted their paper for publication that the population size had continued to recover beyond 2010?

I suggest the reason is this: according to the USGS press release (pdf here), the 2010 estimate of ~900 bears (range 606-1,212) will be included in the next Polar Bear Specialist Group (PBSG) Southern Beaufort Sea (SBS) assessment.

And here’s why that fact is crucial: As I said in a previous post (“BBC provides a forum for desperate biologists“), a new polar bear assessment is due by June 2015 (7 months from now) and the IUCN is demanding an argument with the kind of numbers that come from mark-recapture work.

Because there were some serious problems identified with the previous Southern Beaufort Sea population assessment (Regehr et al. 2006), discussed here, the PBSG needed another SBS study to use for the upcoming 2015 IUCN assessment — this one (Bromaghin et al. 2015 ) is it.

The new method of modeling population estimates developed by Bromaghin and colleagues gave a result that just happens to be what the PBSG need to ensure the bears ‘threatened’ status is upheld. Stopping the study in 2010, which added only three years of new data, made a significant contribution to this desired result — the appearance of a population in decline.

The bottom line is this: the authors knew that data existed showing the population had continued to increase beyond 2010 but they failed to mention that fact in their paper, in the press release or in their interviews with the press.

Another instance of withholding data.

“We present a new strategy for searching the space of a candidate set of Cormack-Jolly-Seber models and explore its performance relative to existing strategies using computer simulation. The new strategy provides an improved assessment of the importance of covariates and covariate combinations used to model survival and recapture probabilities, while requiring only a modest increase in the number of models on which inference is based in comparison to existing techniques.”