Posted on April 3, 2015 | Comments Off on Superb sea ice conditions for polar bears worldwide during their critical feeding period

Prognosis, excellent. The sea ice hunting platform that polar bears require is everywhere and Davis Strait ice extent is the fourth-highest it’s ever been at this time of year.

The spring feeding period is a messy, brutal business – many cute baby seals will die as polar bears consume 2/3rds of their yearly food supply over the next few months (April – June/early July), while sea ice is abundant.

That leaves the remaining 1/3 of their energetic needs to be met over the following 9 months (most of it in late fall (late November/December) and hardly any during the summer months, regardless of whether the bears are on land or out on the sea ice) or over the winter.
In their study comparing Eastern [now Southern] Beaufort and Western Hudson Bay polar bear Stirling and Lunn (1997:176) concluded:

“From the results presented above, it seems clear that the most critical factor affecting reproductive success, subsequent condition and probably survival of polar bears is the availability of ringed seal pups from about mid-April through to breakup sometime in July.” [my bold]

“Stirling & Øritsland (1995) estimated that in most areas, polar bears likely accumulate two thirds or more of the energy they will need for the entire year during the late spring and early summer before breakup. The long open water season in much of the Arctic necessitates accumulation of fat reserves.” [my bold]

Hudson Bay is still virtually filled with ice, as is usual for this time of year, shown below — it isn’t even close to breakup:

Sea ice on Canada’s East Coast is above average for this date (see inset map in graph below, region defined is marked in red), click to enlarge:

Ice in the Southern Labrador Sea, where huge harp seal pupping grounds are located, is also above average:

Below, at an extent of 14.33 mkm2 on April 2, NSIDC map shows that virtually all of the “missing” ice (relative to the long-term average) is lacking in the Sea of Okhotsk– where there are no polar bears (and never have been) – and the Barents Sea, which is strongly influenced by the cyclical AMO.

Compare early April 2015 above with end of March 1979 below (at 16.4 mkm2): there is probably close to the same total amount of polar bear habitat, if you take into account the well-above average ice extent in the Sea of Okhotsk in 1979 vs. the well-below average amount in 2015: 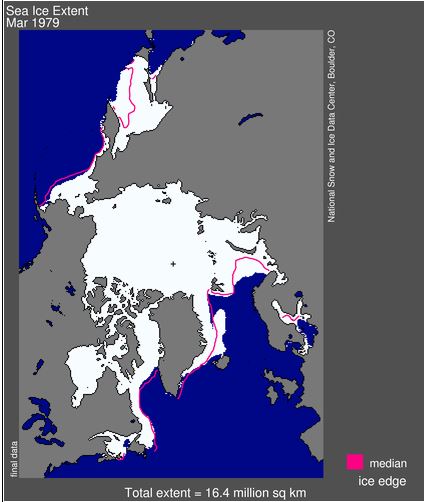 Stirling, I. and Øritsland, N. A. 1995. Relationships between estimates of ringed seal (Phoca hispida) and polar bear (Ursus maritimus) populations in the Canadian Arctic. Canadian Journal of Fisheries and Aquatic Sciences 52: 2594 – 2612. http://www.nrcresearchpress.com/doi/abs/10.1139/f95-849#.VNep0y5v_gU