Posted on November 8, 2017 | Comments Off on Experts talk of their bleak future, W Hudson Bay polar bears get earliest freezeup in decades

It seems that Churchill residents and visitors woke up this morning to find most local polar bears had left to go hunting — on the sea ice that supposedly doesn’t exist. Right in the middle of the Polar Bear Week campaign devised by Polar Bears International to drum up donation dollars and public sympathy for polar bear conservation!

Frigid temperatures and north winds last night helped the process along, but this early freeze-up has been in the works for almost a week. From what I can ascertain, it appeared the only bears around onshore today were a mother with her young cub moving out towards the ice (females with cubs are usually the last to move offshore, probably to reduce the risk of encounters with adult males who might kill the cubs).

Tundra Buggy cams at Explore.org have been showing markedly fewer bears today and those that have been seen were on the ice (see above and below) or heading out to it.

The chart below is for yesterday (7 November), before the cold and north winds hit the region. It shows the concentration of ice that’s >15 cm thick.

The chart for 8 November is below, after the storm.

This is ice thick and extensive enough for polar bears to go hunting. Some bears almost certainly left shore yesterday, with the rest following quickly on their heals today. There are sure to be some stragglers left ashore that will leave over the next few days but the fact remains: there is sea ice to be had for those polar bear willing to start hunting.

Watch polar bear on the WHB sea ice below (screen caps below – and one above – were taken the afternoon of 8 November, from the Tundra Buggy Cam live feed near Churchill). 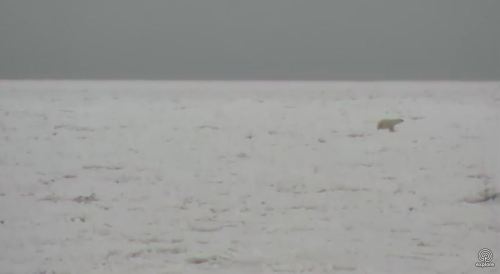 Keep in mind that in the 1980s, bears left for the ice on 8 November, on average. That means we’re back to a 1980s freeze-up scenario, at least for this year.

Funny how no one bothered to mention the potential for an early freeze-up to the media last week, when scientist were so eager to talk about the imminent demise of WHB bears. And funny that Polar Bears International hasn’t tweeted a word today about the famous Churchill bears having enough sea ice to go hunting, smack in the middle of Polar Bear Week.

Yes, the “Save Our Sea Ice” PBI rallying cry sounds a bit hollow with sea ice as far as the eye can see off Churchill today. But will anyone in the mainstream media point out the irony?

In 2016, there was ice developing along shore on this date but a south wind came along and blew it offshore. Bears didn’t leave the ice for another 4 weeks:

What the ice looked like on 7 December 2016, when most bears left shore:

The weekly chart for that first week in December 2016 (daily charts not available):

In 2015, most bears were hunting by 20 or 21 November although a few left earlier when the ice looked like this:

but most bears were gone by 16 November:

But most bears left during the week after 13 November:

2007 (looks like an early freeze-up year to the north, not so much around Churchill):