Panic over Arctic temperatures got smeared across news networks last week, so I think a bit of perspective is in order, including an assessment of what this means for polar bears and their prey (because some of the hysteria is being amplified from that corner).

The region causing all the kerfuffle is at the northernmost tip of Greenland (see map below), where there is a weather station at Cape Morris Jesup. Next-nearest stations are at Alert, Canada (to the west) and Longyearbyen, Svalbard (Norway, to the east). 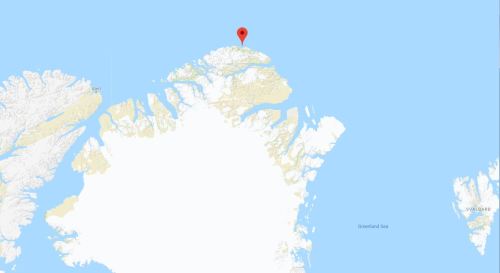 Arctic temps spike over 30 degrees in the midst of winter (The Weathern Network, Friday, February 23, 2018) included the tweet below, showing a fracture of sea ice north of Greenland so transient that it does not show up on daily sea ice maps:

“Along with those spikes in temperature, Lars Kaleschke’s tweet, above, also shows the large rift in the sea ice that opened up just north of Cape Morris Jesup, at the same time. Kaleschke is a professor of sea ice remote sensing at the Center for Earth System Research and Sustainability, at the University of Hamburg, in Germany.“

Summary: Temperature and sea ice “abberations” in northern Greenland are transient phenomena that have clearly happened before (e.g. 2011) without major consequences except perhaps through impacts on eastern Arctic and subArctic weather conditions (including the UK).

Lack of sea ice north of Svalbard in the Barents Sea occuried last year and in 2012 in Februrary. But by mid-to-late March, when seal are beginning to give birth on the ice and polar bears are busy hunting them, ice had again covered the region. This year is likely to be the same. However, we won’t know until the end of March or ealry April if a recovery will or won’t happen, so any alarm-ringing about impacts on Arctic fauna surival have no foundation in fact until then. 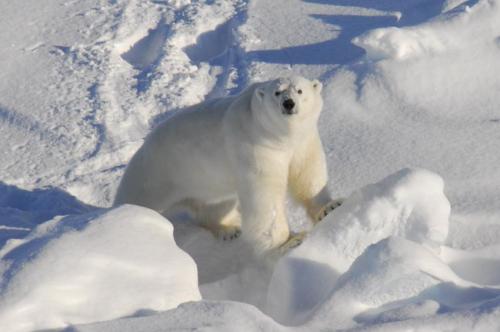 In the Bering Sea, ice extent is well below average for this time of year but studies show the one consistent feature of Bering Sea ice is its variability. Low ice levels have distressing impacts for St. Lawrence island seal and whale hunters. However, there is certainly enough ice in the Bering Sea/Chukchi Sea region for polar bears and Arctic seals to do what they do this time of year (which is try to survive until early April, at which time seals start giving birth to their pups and polar bears start to eat them, with gusto). And the ice season isn’t over: maximum extent of ice in the Bering sea doesn’t usually come until late April or May, and the dramatic decline of mid-February already shows signs of reversing.

Details below this ice map for 24 February 2018, courtesy NSIDC Masie: 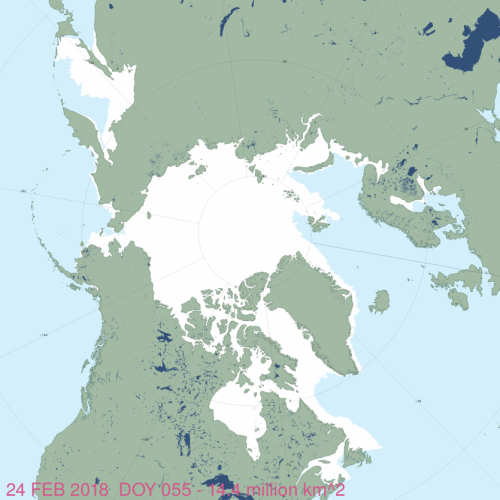 PS. I’m off within hours to Toronto for the launch of my State of the Polar Bear Report in honour of International Polar Bear Day, 27 February. Watch for reports in the news and for my op-ed 27 February at the Financial Post.

“On Monday and Tuesday, the northernmost weather station in the world, Cape Morris Jesup at the northern tip of Greenland, experienced more than 24 hours of temperatures above freezing according to the Danish Meteorological Institute.

“How weird is that?” tweeted Robert Rohde, a physicist at the University of California at Berkeley. “Well it’s Arctic winter. The sun set in October and won’t be seen again until March. Perpetual night, but still above freezing.”

This thaw occurred as a pulse of extremely mild air shot through the Greenland Sea.

Warm air is spilling into the Arctic from all sides. On the opposite end of North America, abnormally mild air also poured over northern Alaska on Tuesday, where the temperature in Utqiaġvik, previously known as Barrow, soared to a record high of 31 degrees (minus-1 Celsius), 40 degrees (22 Celsius) above normal.

The warmth over Alaska occurred as almost one-third of the ice covering the Bering Sea off Alaska’s West Coast vanished in just over a week during the middle of February, InsideClimateNews reported.

The mercury at the North Pole could well rise above freezing between Thursday and Sunday.

This next batch of abnormally warm air is forecast to shoot the gap between Greenland and northern Europe through the Greenland and Barents seas. Similar circumstances occurred in December 2016, when the temperature at the North Pole last flirted with the melting point in the dark, dead of winter. We documented similarly large jumps in temperature in November 2016 and December 2015.”

Today (25 February) Robert Rohde was busy tweeting that temperatures at Cape Morris Jesup had broken records but had to recant a short time later:

The GSOD archive of Morris Jesup that I have been relying on only gives a high of +5.4 C on that day.

Assuming the DMI reading is authoritative, then the recent +6 C is actually not a record.

This confirms my own internet search for today’s weather at Morris Jesup, which varied from above zero to well below zero on 25 February. For example, here are the current conditions and forecast (all below zero) from a Norwegian weather service: 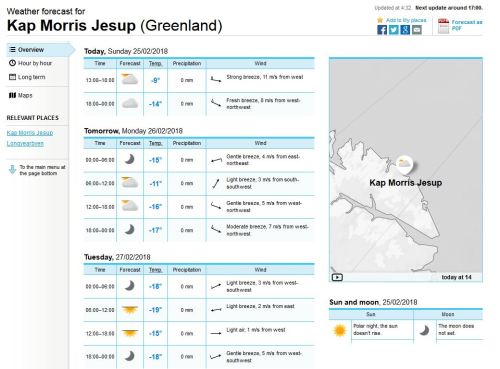 So, which is correct? I have no idea. I also don’t know why the temperatures reported are so different from the same weather station.

Not only that, but it looks like temperature spikes aren’t such a rare occurrance anyway:

Extreme Arctic temperature spikes occur frequently as warm, moist oceanic air arrives either from the Pacific, Atlantic, or thru the Labrador Sea. This chart looks like a heart EKG but highlights the wild winter-time variability in the Arctic w/temp spikes 2004-2018. pic.twitter.com/7jLpGEGyD5

There’s no doubt that a big patch of open water north of Svalbard in the Barents Sea looks odd and out of place in the middle of winter, see map below at 22 February 2018: 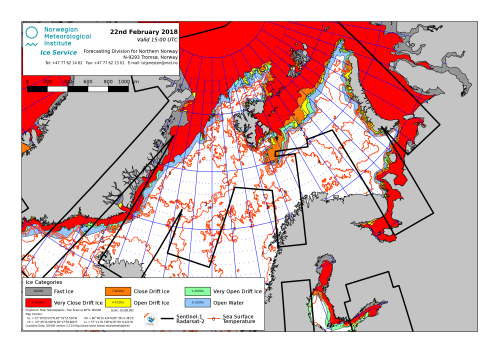 Seen from the Arctic Basin, that open water looks like this (where Svalbard is on the right side of the map): 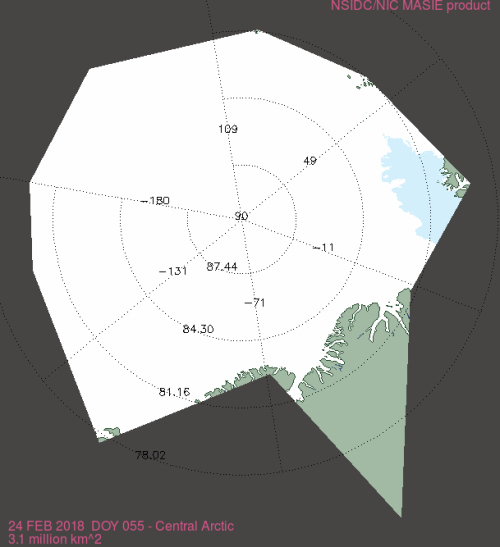 However, a similar phenomenon occurred in 2012 (and to some extent last year) at about the same time but several weeks later ice had moved south from the Arctic Basin. You can see that in the two maps below, one for the Arctic Basin in mid-February 2012 and the other in early April same year (where Svalbard is on the right side of the map): 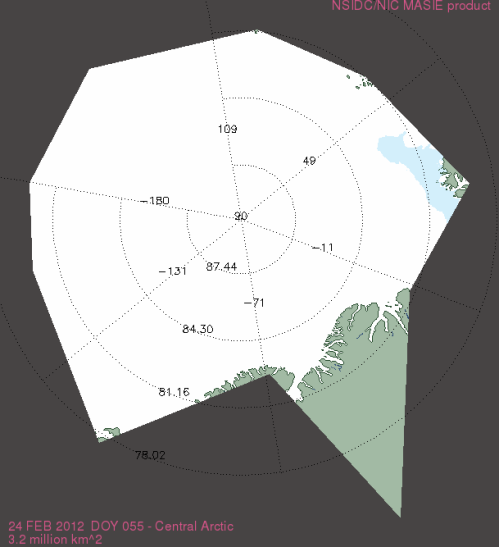 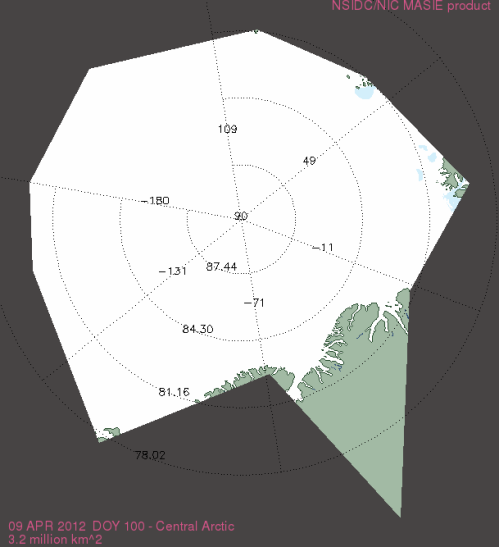 Last year the open water in late February was ice-covered in ice by mid-March: 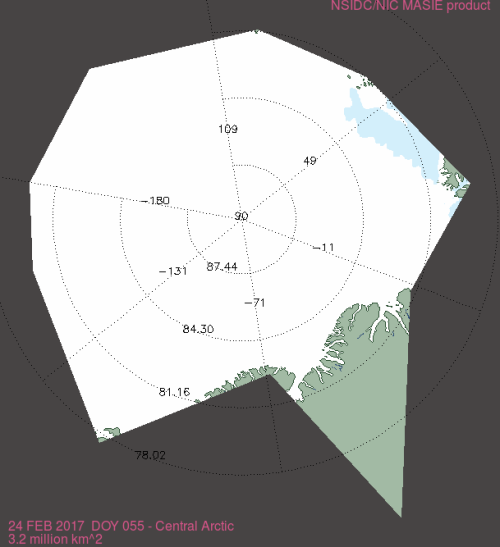 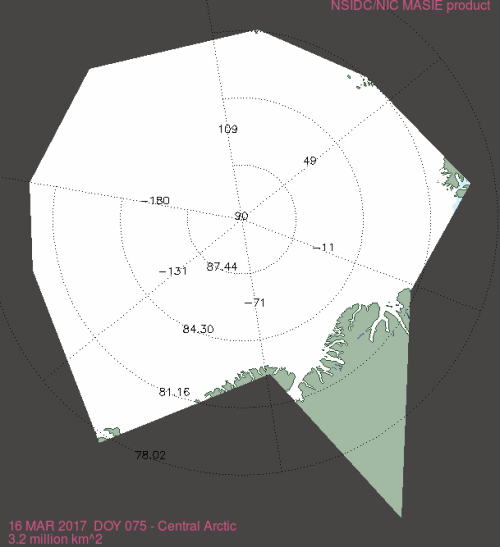 So, let’s hold off on the predictions of doom for Svalbard and Barents Sea polar bears until we see what the ice does over the next few weeks.

Sea ice in the Bering Sea is low 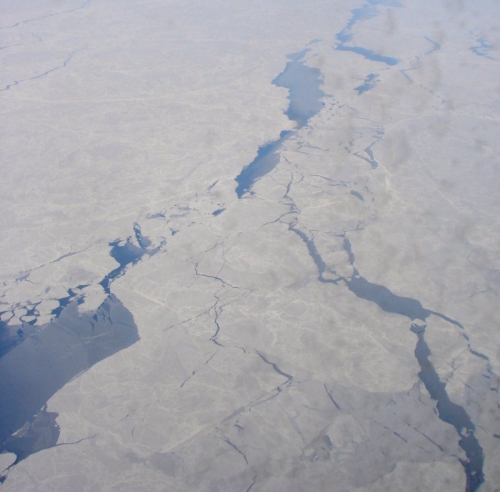 Several outlets are making a big deal of the low ice extent in the Bering Sea this season and the rapid drop that happened mid-month. And while it’s clear the coverage is lower than usual, what’s not clear is whether that matters an iota to marine mammals that live in the Bering/Chukchi Sea complex. You can see the drop in ice going into mid-month in NSIDC Masie’s regional day-by-day plot for February:

It’s certainly true that lack of ice around St. Lawrence Island in the southern region of the Bering Strait will impact seal and whale hunting for residents there.

Mark Serreze of Arctic Death Spiral fame (2010) had this to say [InsideClimateNews, Alaska’s Bering Sea Lost a Third of Its Ice in Just 8 Days; 17 February 2018):

“It used to be just the summer when the ice was breaking low records, but we’re starting to see winter really get into the act now,” said Mark Serreze, the director of the National Snow and Ice Data Center.

“Both the atmosphere and the ocean are really conspiring to keep sea ice levels down,” he said.”

USAToday has chimed in: ‘Unprecedented’: Bering Sea loses half its sea ice over two weeks; 23 February 2018):

“This is unprecedented,” said Brain Brettschneider, a climate researcher at the University of Alaska Fairbanks. “The amount of ice is less than it’s ever been during the satellite era on any date between mid-January and early May.”

This comes as much of western Alaska, including places like Saint Paul Island and Utqiaġvik, formerly known as Barrow, is in the midst of its warmest winter in recorded history.”

So, potential impacts on humans living in the Bering Sea but not necessarily the animals, who are free to move to where conditions suit them. Note that Utqiagvik, formerly known as Barrow, in on the Chukchi Sea, not the Bering Sea: the Bering Sea starts south of the Bering Strait.

The NSIDC Masie map above show lots of ice along the coasts of Chukohtka and Alaska, and surrounding Wrangel Island. There does not yet appear to be a polynya opening up around Barrow yet, as did in May 2015 and also in 1975.

However, I posted about Bering Sea ice years ago: in 2012, actually.  And what I discovered is that the literature shows Bering Sea ice is naturally variable.

“In a study published last year (2011), Zachary Brown and colleagues Gert van Dijken and Kevin Arrigo report that while the Bering Sea was thought to be “rapidly warming and losing sea ice,” the results of their study indicate that “mean annual sea ice extent in the Bering Sea has exhibited no significant change over the satellite record (1979-2009)” and that “the Bering Sea as a whole has undergone no significant change in the timing of ice retreat or advance, or in the length of the ice-free season.”

And like the situation in the Barents Sea, Bering Sea ice does not usually peak until late April or May, so we are a long way off from concluding this is all the ice there will be this year. You can see on the Masie plot above that extent is already picking back up after the mid-February decline.

However, there is certainly enough ice in the Bering Sea/Chukchi Sea region for polar bears and Arctic seals to do what they do this time of year (which is try to survive until early April, at which time seals start giving birth to their pups and polar bears start to eat them, with gusto). 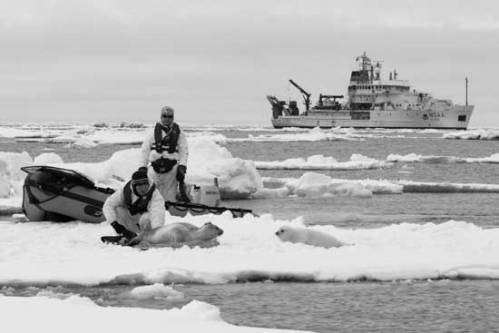