In case you missed it, the text of my Financial Post essay on Netflix false walrus message

Posted on April 27, 2019 | Comments Off on In case you missed it, the text of my Financial Post essay on Netflix false walrus message

For those who missed it on Wednesday, here is the text of my essay on the walrus fiasco published in the Financial Post section of Canada’s National Post. A map of the region under discussion is here.

Now that polar bears have failed to die off in response to a sea-ice decline as promised, climate alarmists are looking hard for a new icon. They think they’ve found it in the walrus. And for their purpose, walruses are more useful dead than alive, and best of all splattered against sharp rocks from a great height. END_OF_DOCUMENT_TOKEN_TO_BE_REPLACED

Comments Off on In case you missed it, the text of my Financial Post essay on Netflix false walrus message

Posted on January 18, 2017 | Comments Off on Polar bears onshore in Svalbard in most dangerous season for bear attacks

Yesterday marked the first report I’ve found for polar bears onshore this winter, in a potentially dangerous repeat of a pattern that has become all-too common in recent years (especially last year) with bear populations booming virtually everywhere (but especially around Svalbard).

This is the leanest time of year for polar bears – fat Arctic seal pups won’t be available for another 2-3 months and meals for polar bears are hard to come by – and that makes the bears especially dangerous.

So, despite the marked lack of sea ice around Svalbard this winter, a female polar bear with two cubs were reported near the community of Longyearbyen (still enduring 24 hours of darkness) – on the west coast of the archipelago (see map above), where sea ice has been virtually non-existent for years (see map below). 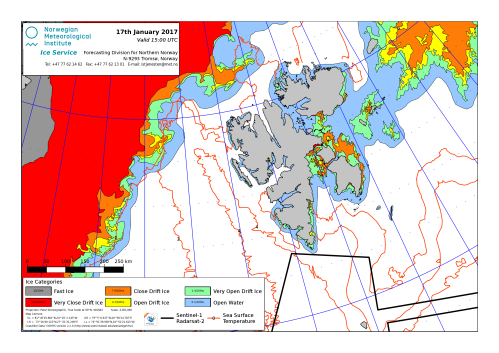 It appears these bears traveled overland from ice off the east coast. There is no mention in any of the reports that the bears were thin or in poor body condition, or had so far caused any of the problems for which desperately hungry polar bears are famous. However, one dog-sledding guide had a frightening encounter in the dark in this on-going saga that began over the weekend (details and photos below). END_OF_DOCUMENT_TOKEN_TO_BE_REPLACED

2015 was a great year for polar bears and for EATEN

Not only did we see plenty of great news about polar bears but EATEN (my first novel) is now well on it’s way to being a resounding success. Don’t let your friends and colleagues have all the nightmares! Fabulous read for a long cold NH winter’s night but also an excellent choice for the beach…perhaps fewer nightmares?

The Canadian Ice Service predictions for winter 2016 off eastern Canada (where my novel takes place) is for extensive ice for the third year in a row. That means only nine years to go for the situation in 2025 to meet my speculations regarding a most terrifying onslaught of starving polar bears in Newfoundland.

I don’t ask for donations here at PolarBearScience – if you appreciate my efforts (418 posts and almost 630,000 views since late July 2012) and would like to see more of the same, please buy a copy or two of my book (and don’t forget to go back and leave a brief review; only the number of stars count). Paperback editions here and here; Ebooks for immediate gratification (Kindle; All other e formats).

In 2015, the Arctic Fallacy was exposed, there were official admissions of population increases (here and here) – all after we had Twenty Good Reasons Not to Worry About Polar Bears.

A heartfelt Happy New Year to you and yours, from a Canadian zoologist not afraid to wonder ‘what if’ but honest enough to call the output fiction.

END_OF_DOCUMENT_TOKEN_TO_BE_REPLACED

The two top posts I published this year had one thing in common – they exposed polar bear researchers dodging full disclosure of scientific information in a way that outraged a lot of people. These two posts still draw a regular crowd of readers.

[Note that #3 was the summary essay, “Ten good reasons not to worry about polar bears” (February 26, 2013), at 5,491 views. Dr. Matt Ridley wrote a foreword introducing that essay (“We should be listening to Susan Crockford”) that appeared in Canada’s Financial Post]

On this last day of the year, I thought I’d make an attempt to put these results into a wider perspective.

END_OF_DOCUMENT_TOKEN_TO_BE_REPLACED

Posted on August 7, 2013 | Comments Off on Ian Stirling’s latest howler: “the polar bear who died of climate change”

A tabloid-style picture-is-worth-a-thousand-words article appeared in the environment section of the UK newspaper The Guardian yesterday (August 6, 2013) with a picture of a dead polar bear meant to wring your heart. The picture is a vehicle for statements from Ian Stirling and others that this polar bear died from climate change. A longer article was alongside.

“This 16-year-old male polar bear died of starvation resulting from the lack of ice on which to hunt seals, according to Dr Ian Stirling.”

Many folks have been asking questions about this and so have I.

I suggest this is what really happened: the polar bear biologists working in Svalbard earlier this year knew this bear was going to die back in April when they captured him – they simply waited, with a photographer on hand, until he died. It was an orchestrated photo-op.

[Update, Aug. 8, 2013: I suggest it was not necessary for anything more to happen to “orchestrate” this photo than for the researchers who captured the bear in April to tell colleagues and local tour boat operators (who always have avid photographers on board) to “keep an eye out for a dead bear, we don’t think this guy is going to make it.” However, very little real information is provided. Who knows when (or from whom) we’ll get the whole story — if ever? That’s why anecdotal accounts like these aren’t “evidence” of anything, in the scientific sense. That’s the real take-home message here.  If this dead bear was being presented as scientific evidence, we’d have been given all the details, including necropsy results, local ice conditions, precise dates, locations, and photos of any other bears that were seen that were in poor condition. In other words, a proper scientific report. ]

END_OF_DOCUMENT_TOKEN_TO_BE_REPLACED

Comments Off on Ian Stirling’s latest howler: “the polar bear who died of climate change”