Don’t expect to hear this news from polar bear activists busy promoting the supposed threat to polar bears from declining Arctic sea ice but ice cover over Hudson Bay so far this summer has been very similar to what it was in the 1980s – often promoted as ‘the good old days’ for Western Hudson Bay polar bears. As of the end of June 2020, very concentrated ice (9/10-10/10) more than 1 metre thick still covered most of the bay and there was still no open water near Churchill along the west coast down into James Bay.

Polar bear activists don’t like to have current Hudson Bay sea ice reality ruin their social and news media narrative that ‘polar bears are all gonna die’, so they instead emphasize the obsolete ‘declining trend’ for Western Hudson Bay breakup dates that haven’t been updated since 2015 (e.g. Castro de la Guardia et al. 2017; Lunn et al. 2016). They do this despite the fact their colleagues admit polar bears don’t catch many seals after late June (regardless of sea ice conditions) because it is past the peak spring feeding period (Obbard et al. 2016; Lippold et al. 2019). Like in the 1980s, in 2015 and 2019 some bears stayed on the ice until early August and 2020 is shaping up to be another 1980’s-like summer.

END_OF_DOCUMENT_TOKEN_TO_BE_REPLACED

Polynya refresher: open water in spring is due to winds & currents, not ice melt

Posted on May 3, 2018 | Comments Off on Polynya refresher: open water in spring is due to winds & currents, not ice melt

Arctic sea ice begins to open up in spring at predictable locations due to currents and prevailing winds and this was as true in the 1970s as it is today. Polynyas and widening shore leads that most often get mistaken for early sea ice melt are those in the Beaufort and Chukchi Seas and in Hudson Bay.

But contrary to concerns expressed about possible negative implications of these early patches of open water, these areas have always been critical congregation areas for Arctic seals and are therefore important feeding areas for polar bears. 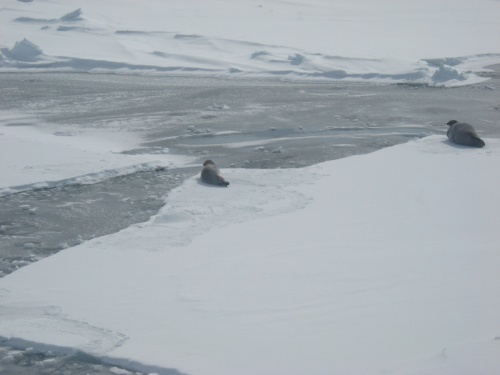 Seals hauled out beside a lightly frozen over lead in Beaufort Sea ice, 2008. USFWS.

END_OF_DOCUMENT_TOKEN_TO_BE_REPLACED

Comments Off on Polynya refresher: open water in spring is due to winds & currents, not ice melt