Posted on October 17, 2020 | Comments Off on Some surprises in polar bear sea ice habitat at mid-October 2020

Arctic sea ice has been growing steadily since the minimum extent was reached a month ago, with shorefast ice now developing along the Russian and Alaskan coastlines as ice cover expands in the Central Canadian Arctic. So while it’s true that the main pack of Arctic ice is far from the Russian shoreline, rapidly developing shorefast ice will allow bears to begin hunting seals long before ice in the central Arctic Basin reaches the Siberian shore, as they do in Western and Southern Hudson Bay every fall.

And speaking of Western Hudson Bay, it’s a very slow season around Churchill for problem polar bears (photo below) – the quietest mid-October for the Polar Bear Alert Program in the last five years and perhaps the quietest in decades (which I could say for sure if I had the records but I do not). 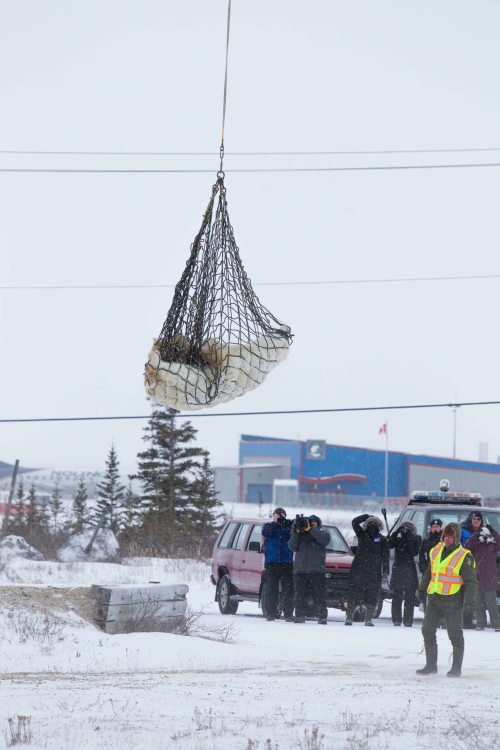 END_OF_DOCUMENT_TOKEN_TO_BE_REPLACED

It’s week 7 of the Churchill polar bear season that began in early July and it’s been remarkably quiet: compared to 208 and 2016, there were half as many problem bear incidents in 2019. A few bears have come off the ice near the community and they’ve been in good shape, as are the bears to the east at Cape Churchill (see one captured on live cam 23 August shown below) and the north at Seal River.

But it looks like many more bears than usual may have decided to ride out the slow-melting ice that lingered well past the first week of August and came ashore further south, towards the Manitoba/Ontario border.

If so, these bears will have to make their way north over the summer so they can intercept the first ice forming along the northwest coast off Wapusk National Park near Churchill. That’s why Western Hudson Bay bears are said to undergo a migration: no matter where they leave the ice in summer, most bears head to areas around Churchill so that they can resume seal hunting on the early fall ice.

A paucity of bears around Churchill in late summer/early fall is not unprecedented, however. Stirling and colleagues pointed out that in 1972 and 1973, for reasons they could not explain, there had been fewer bears than usual around Churchill well before freeze-up and therefore, fewer problem bears (Stirling et al. 1977:17).

Below is a comparison of the Polar Bear Alert Program report for last week (Week 7, Aug 19-25) to previous years.

END_OF_DOCUMENT_TOKEN_TO_BE_REPLACED

First Churchill problem polar bear report of the season: its only incident caught on film

Posted on July 21, 2019 | Comments Off on First Churchill problem polar bear report of the season: its only incident caught on film

We are constantly told things are getting worse for polar bears, especially those in Western Hudson Bay, because the ice-free season there was predicted to decline earlier than other regions. It hasn’t turned out that way but that does not stop the public rhetoric of doom or NGOs pleading for funds.

Last week, the Town of Churchill made public its first problem polar bear report of the year but oddly, it has only one entry.  This is the first time I’ve seen such a sparse first report:  since 2015, the first few incidents of the season have been subsumed into a first week report (issued no earlier than the first week of July) that announces the arrival of many bears on land. 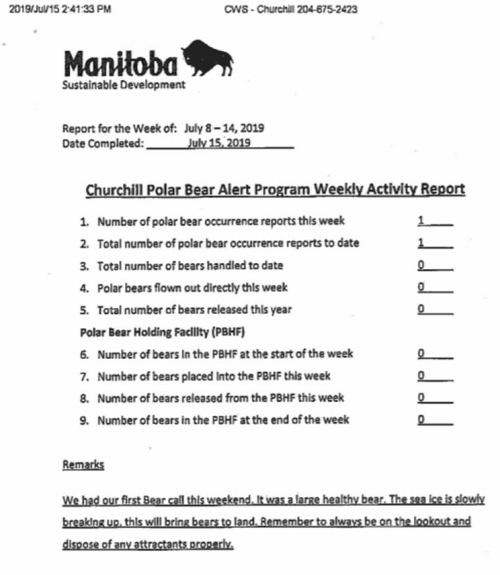 Is this report of an isolated incident an attempt by Polar Bear Alert officials to make sure the first report of the season was not issued weeks later than usual? Or was it posted in isolation because the official response to the incident was caught on video and shared on social media (see below)?

UPDATE 22 July 2019: Published early this afternoon by the Town of Churchill, the problem polar bear report for the 2nd week of the season claims an error in last week’s report that they only just noticed when preparing this week’s report (but a full 24 hours after this blog post was published – but that’s probably a coincidence). Below is the report for week 2 (15-21 July 2019), showing that three incidents occurred last week.

END_OF_DOCUMENT_TOKEN_TO_BE_REPLACED

Comments Off on First Churchill problem polar bear report of the season: its only incident caught on film

New ice on Hudson Bay a week earlier than 2017: another early freeze-up ahead?

Last year, an early freeze-up of Western Hudson Bay sea ice almost ruined the Polar Bear Week campaign devised by Polar Bears International to drum up donation dollars and public sympathy for polar bear conservation. Many bears were on the ice hunting by 7-8 November in 2017 before the celebratory week was done (the average date that bears left the ice in the 1980s): sea ice charts suggest the same may be happening this year.

Ice is forming along the Hudson Bay coast more than a week earlier than it was last year (barely discernible on the map below but detailed ice charts show it clearly), consistent with early build-up of ice in the Canadian Archipelago, East Greenland, and Foxe Basin since mid-September.

The question is: will the ice continue to build over the next few weeks or get blown offshore? See the ice charts below for this year and 2017.
END_OF_DOCUMENT_TOKEN_TO_BE_REPLACED

Comments Off on New ice on Hudson Bay a week earlier than 2017: another early freeze-up ahead?

Problem polar bears of Churchill: first report of the season similar to 2016

Posted on July 19, 2017 | Comments Off on Problem polar bears of Churchill: first report of the season similar to 2016

The first activity report of the Churchill Polar Bear Alert Program has been released for 2017. It comes on the same week as last year’s (so about the same dates for first bears ashore both years), and reports pretty much the same activity. 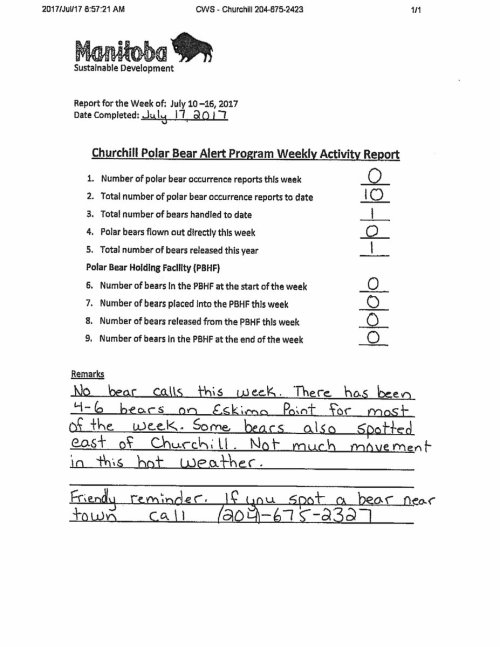 Odd that this year’s report contains no mention whatsoever of the condition of the bears as did last year’s (see below), which may have brought criticism for spoiling the media ‘message’ that WHB bears are suffering because of reduced sea ice. Better no comment at all than good news, eh?

Sea ice for the week of 10 July off Western Hudson Bay this year consisted of a broad strip of thick first year ice (>1.2m thick) just off shore.

The ice charted above looked like this on a standard ice map:

There are no other reports that I could find of polar bears ashore along the coast of Western Hudson Bay, so these bears must be the first wave.

END_OF_DOCUMENT_TOKEN_TO_BE_REPLACED

Comments Off on Problem polar bears of Churchill: first report of the season similar to 2016

Posted on October 13, 2016 | Comments Off on Arctic sea ice grows & Churchill polar bears into their 4th month of fasting

A quiet year for problems in the polar bear capital of the world (Churchill, Manitoba) so far – despite this year tying for the second-lowest minimum since 1979 – and the ice is growing fast. In fact, Arctic ice growth in the second half of September was rapid and there is now more ice than there was at this date in 2007 and 2012 (when polar bears in those regions considered most at risk did not die off in droves).

Pessimistic polar bear specialists are wrong  – polar bears are much more resilient to low sea ice levels in summer than they assume: their own data from low summer ice years proves it.  If you’ll recall from my previous post, polar bears seem to have barely survived the extensive sea ice coverage during the Last Glacial Maximum – in other words, too much ice (even over the short term) is their biggest threat. Polar bear numbers, as confirmed by the latest estimates in the 2015 IUCN Red List assessment, are higher now than they have been since the 1960s, despite almost 10 years of summer sea ice minimums below 5.0 mk2.

Churchill Polar Bear Alert reports and Arctic sea ice comparisons at this date, in detail below.

END_OF_DOCUMENT_TOKEN_TO_BE_REPLACED

Posted on November 25, 2015 | Comments Off on W Hudson Bay polar bears now on the ice hunting but killer whales could be trapped

According to reports from folks on the ground in Western Hudson Bay, most polar bears were out on the ice resuming seal hunting by the 20th or 21st November at the latest (some got started quite a bit earlier). That’s less than 2 weeks later than the average date in the 1980s (which was November 8).

However, the rather odd pattern of freeze-up this year may not be good news for any killer whales still remaining in Hudson Bay – their access to the open ocean is already virtually blocked by ice.

UPDATE 26 November 2015: What a difference a day makes! Look at the spectacular ice development overnight along the west coast of Hudson Bay and in the central portion of the bay since yesterday (below).

END_OF_DOCUMENT_TOKEN_TO_BE_REPLACED

Posted on August 2, 2015 | Comments Off on Keeping track of problem bears in Churchill

The City of Churchill has recently taken to posting its problem bear reports on its Facebook page. This is something to keep an eye on, so let’s catch up so that future reports can be put into context.

Photo above:  A bear is transported to Churchill’s polar bear holding facility (from a 2011 Huffington Post article, “Polar Bear Prison”).

END_OF_DOCUMENT_TOKEN_TO_BE_REPLACED

Comments Off on Keeping track of problem bears in Churchill