Why is it that every decade, Eastern Beaufort sea ice gets really thick?

Posted on June 28, 2013 | Comments Off on Why is it that every decade, Eastern Beaufort sea ice gets really thick?

I’ve written before about the incidents of starving polar bears in the eastern portion of the Southern Beaufort Sea (here, here, and here). For two or three years every decade since the 1960s, shorefast ice in the Eastern Beaufort (Fig. 1) has become too thick and compressed in the spring for ringed seals to maintain their breathing holes, so most or all of them presumably go elsewhere — as seals did in Greenland when ice got too thick there (Vibe 1965). With few or no seal pups born during March and April in thick ice years, some bears had a hard time finding enough food: starving bears and dying cubs were the result.

Figure 1. ‘Eastern Beaufort’ (yellow square) polar bear study region.
The communities of Tuktoyatuk (locally known as ‘Tuk’), and Sachs Harbour on southern Banks Island have been used as base camps for polar bear research because they are accessible by plane via the larger community of Inuvik.
The light blue portions along western Banks Island and the Eastern Beaufort/Yukon mainland coast indicate shallow continental shelf areas (20 km wide in places) where extensive shorefast ice develops every winter.
Main map from Beaufort Sea Partnership, inset map from Wikipedia.

I’ve been trying to get my head around why this would happen in the Eastern Beaufort. Once or twice – maybe – but several times every decade? What on earth drives such a process?

So, I did some reading (actually, quite a lot of reading) and have what appears to be at least a partial answer.

All indications are that the occasional development of exceptionally thick spring ice in the Eastern Beaufort is the result of an entirely natural, cyclical phenomenon. However, some polar bear biologists are attempting to blame the latest episode (but not earlier ones) on increased amounts of open water in the Chukchi Sea during fall of the early 2000s. That doesn’t seem a plausible explanation to me, given the history of the sea ice in this region. Have a look.

END_OF_DOCUMENT_TOKEN_TO_BE_REPLACED

Comments Off on Why is it that every decade, Eastern Beaufort sea ice gets really thick?

I’ve had quite enough of the obfuscation of facts and model-based extrapolations into the future with regards to polar bears. I’m pretty sure I’m not the only one who is interested in what polar bears are doing now and, as much as can be determined, get some understanding of what the biological, geological and evolutionary history of polar bears and their habitat looks like. Spare us the emotional media hype, icon-peddling and fear-mongering about the future — we’d just like some information about the bears! 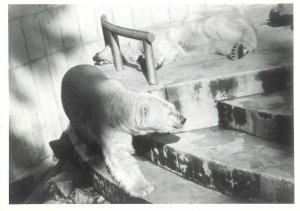 Polar bears at the Stanley Park Zoo, Vancouver, taken with my first camera in the early 1970s.

I’ve been looking at the scientific literature produced by polar bear and Arctic seal biologists for some time and I’ve found it contains some rather interesting and potentially important facts that are being left out, glossed over, or misrepresented in statements and publications generated by polar bear advocates of all kinds. It’s past time for these issues to be brought to light and publicized in one easily-accessible, up-datable forum. Hence, PolarBearScience.com — a new blog in which I discuss the science of polar bears while throwing cold water on some of the spin. END_OF_DOCUMENT_TOKEN_TO_BE_REPLACED

Comments Off on Cooling the polar bear spin