The IUCN Polar Bear Specialist Group admits its global population estimate is simply a qualified guess with a large potential error.  So perhaps it’s time to acknowledge that for the purpose of comparing polar bears to other species of concern, the upper limit for polar bear numbers worldwide could be more than 30,000?

See previous posts on this global population size issue (here and here); updated information below, including the most recent IUCN PBSG statement.

UPDATE 1 September 2015: here is an updated graph of polar bear population numbers that undo the “subtractions” of the PBSG between 2001 & 2013, giving a final global estimate of about 26,000. Click to enlarge:

UPDATE 25 November 2015: The 2015 update of the IUCN Red List for polar bears essentially concurs with my assessment about polar bear numbers. They estimate the current global population is 20,000-31,000 (average of 25,500, see below, without considering the number of bears in the Arctic Basin, so not far off my assessment) but say the trend in the population is “Unknown.”

The total of mean population estimates for all subpopulations listed in the lasted PBSG status table, January 2015 (pdf here) is:

This average (25,344) is at least 1,000 more than the estimate given by the PBSG on 8 July 2014 (25,000) for a “mid-point estimate” (average) of the global population in part because they deliberately excluded the Arctic Basin estimate and used a fabricated estimate for East Greenland (of a few hundred bears) to make it fit within their preferred “25,000” total (previously, the East Greenland subpopulation has been estimated at 2,000 bears):

“For the 14 subpopulations with scientific estimates, the sum of the mid-point estimates is 18,349 bears (see status table for estimates). Adding the approximately 6000 bears the PBSG hypothesized could be in the Chukchi, Kara, and Laptev seas, would bring the estimate to 24,349. An unknown number of polar bears in East Greenland brings the midpoint estimate to approximately 25,000.”  [my bold]

[Note, the July 8 version quoted above was replaced by a different one on July 11, which left out the reference to “6000 bears” they considered likely to be present in the Chukchi, Kara, and Laptev Seas, see discussion here]

Note that the official polar bear population estimate is no longer said to be “20,000-25,000.”  Instead, the IUCN PBSG simply state that the mid-point estimate is about 25,000, with no range given. The following qualifier is also provided:

Because the global population estimate range includes subpopulation estimates of variable quality it is not used as a monitoring benchmark or other status assessment tool. Rather, it simply expresses a reasonable range in numbers, based on a combination of the best available information and understandings of polar bear habitat. Conservation assessments focus on the trends in subpopulations for which statistical estimates are available. Some of those subpopulations are declining, others are stable, and some may be increasing.

The PBSG apparently don’t want anyone to assume that the global polar bear population estimate is accurate enough to track changes in abundance over time – if it goes up a bit, it means nothing, and if it goes down a bit, it also means nothing. They think the number “25,000” implies less accuracy than does “26,000” – so that’s the number they prefer to use.

However, for comparative purposes, it is very useful to know that there are considered to be about 20,000 – 32,000 polar bears worldwide, which is a plausible range based on the best available information.

Note that number is far higher than the global population of endangered snow leopards (estimated at about  6,000 cats, range 4080-6590). 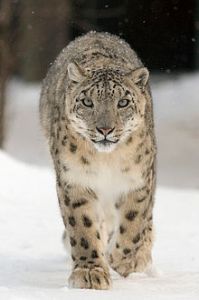 It also means there are at least as many polar bears (if not more) than there are southern white rhinos, last estimated at about 20,000 animals (once considered endangered, now listed as ‘near threatened’ by the IUCN) and considered a conservation success story.  In contrast, at this time, polar bears are listed as ‘vulnerable’ (equivalent to ‘threatened’ under the US Endangered Species Act).

A global estimate for polar bears helps us keep all species of concern in perspective. Relative to other species at this point in time, polar bears are not rare, nor are their numbers drastically reduced.

They’re also well distributed throughout their available habitat (see range map below). Even more than the southern white rhino, polar bears have all the characteristics of a healthy species and a conservation success story. 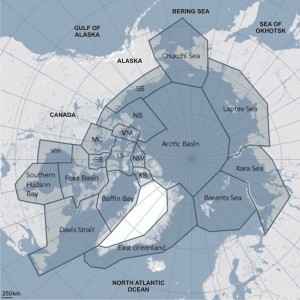 Footnote 1. Five populations not included in IUCN totals, added to mine:

“We assumed that the similar size of the two populations (CS: 2000 bears based on extrapolation of den surveys; Aars et al., 2006; SB: 1526 +/- 315 bears based on capture-recapture estimation; Regehr et al., 2006) would allow use of a common area threshold for the “reduced ice days” metric by creating an effectively similar metric of population density.” [my bold]