Tracking west Alaskan polar bears in the Beaufort in October – all at Banks Is., CAN

Posted on November 5, 2016 | Comments Off on Tracking west Alaskan polar bears in the Beaufort in October – all at Banks Is., CAN 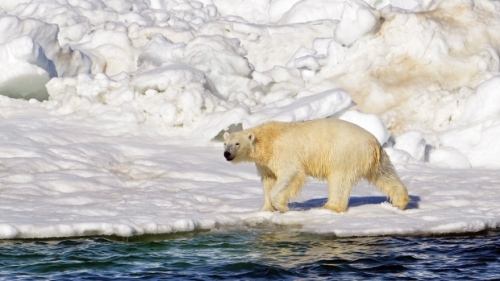 Two out of three polar bear females that were collared by USGS researchers near Barrow, Alaska last spring are hanging out on the northwest coast of Banks Island, Canada. The other bear (bright green icon) appears to have been collared on the ice off Prudoe Bay in April. And as I discussed last month, it’s unusual for bears from the western end of the Southern Beaufort subpopulation (or even the central region) to end up in the Northern Beaufort subpopulation territory. 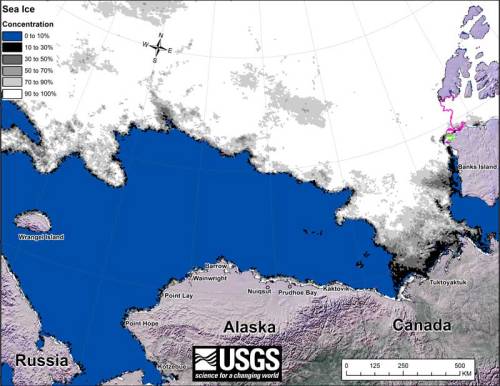 Original caption: “Movements of 3 satellite-tagged polar bears for the month of October, 2016. Polar bears were tagged in 2016 on the spring-time sea ice of the southern Beaufort Sea. All 3 of these bears have satellite collar transmitters. Polar bear satellite telemetry data are shown with AMSR2 remotely-sensed ice coverage from 29 October, 2016.” See full resolution image here and close-up below.

END_OF_DOCUMENT_TOKEN_TO_BE_REPLACED

Comments Off on Tracking west Alaskan polar bears in the Beaufort in October – all at Banks Is., CAN

Tracking polar bears in the Beaufort Sea during August 2016

Posted on September 7, 2016 | Comments Off on Tracking polar bears in the Beaufort Sea during August 2016

Only three females with collars are still being tracked by USGS researchers in the Beaufort Sea and all of them spent August 2016 on the sea ice in the eastern portion, off the coast of Banks Island. 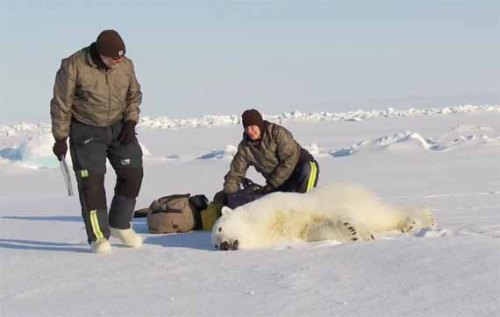 Meanwhile, as Arctic sea ice nears the annual low, NSIDC predicts that 2016 will likely not set a new record but may bottom-out below 2007 (the second-lowest since 1979). The impact of low September sea ice on polar bear health and survival, based on recent research reports, will be the topic of an upcoming post.
END_OF_DOCUMENT_TOKEN_TO_BE_REPLACED

Posted on January 5, 2016 | Comments Off on Tracking polar bears in the Beaufort Sea – one tagged bear left at year end 2015

I’ve combined the months of November and December for this post on USGS polar bear tracking in the Beaufort Sea because there’s not much to tell: there’s one tagged bear left and she’s going almost nowhere. Where’s the news in that? 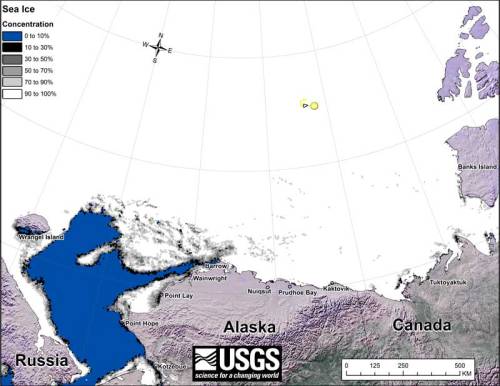 Movements of 1 satellite-tagged polar bear female for the month of November, 2015; shown with sea ice coverage at 30 November 2015. This bear was tagged in the spring of 2015 in the Southern Beaufort Sea. See original image here and December movements below.

Actually, it does tell us something: this female is probably in a sea ice den, a relative common phenomenon in the Beaufort Sea. And she’s on ice that’s out over very deep water. END_OF_DOCUMENT_TOKEN_TO_BE_REPLACED

There is still a lot of sea ice in Hudson Bay, Foxe Basin, Davis Strait and Baffin Bay this week – more than average for this date – with slightly less than average in the Beaufort Sea. Past behaviour of Western and Southern Hudson Bay polar bears suggests the mean date that bears come ashore for the summer this year will be later than average due to the plentiful ice available, regardless of when polar bear biologists decide that “breakup” has occurred.

Published data shows that most polar bears of Western Hudson Bay traditionally come ashore in July, but this year it might be late July or even August. Have a look at the charts below.
END_OF_DOCUMENT_TOKEN_TO_BE_REPLACED

Sixteen females with satellite collars plus one with a glue-on transmitter – down from 17 with collars and 6 with tags last month – all out on the ice during the month of June 2015. 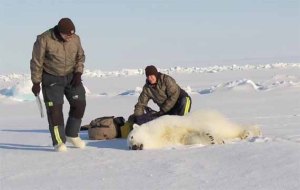 Polar bears were captured by USGS biologists in 2014 and 2015 on the spring-time sea ice of the southern Beaufort Sea. The glue-on tags don’t seem to be holding up very well, with only one remaining out of the original eight deployed this spring.
END_OF_DOCUMENT_TOKEN_TO_BE_REPLACED