Posted on May 15, 2015 | Comments Off on Beaufort Sea polynyas open two weeks before 1975 – open water is good news for polar bears

With masses of very thick, multiyear ice off Alaska this spring, the developing polynyas (open water) at either end of the Beaufort Sea are providing essential polar bear hunting habitat. 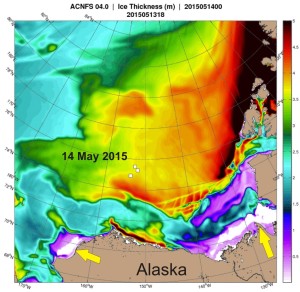 Patches of open water in the Beaufort Sea are naturally recurring phenomena. This year we have two excellent examples, shown by the yellow arrows in the sea ice thickness map above (from the Naval Research Laboratory).

The eastern-most polynya forms in the Canadian portion of the Beaufort most years in the spring. This open water feature is so common it has a name – the Cape Bathurst polynya. Last year, there wasn’t an obvious polynya there until sometime in June, but in 1975, a patch of open water almost as large (or larger) as this year’s had developed by the end of May (Fig. 1).

Figure 1. Cape Bathurst polynya at 28 May 1975 (Smith and Rigby 1981:Fig. 14h) and the polynya this year at 14 May (Canadian Ice Service). See discussion in the text below about the relative sizes. Click to enlarge.

According to the experts that study them, the timing and extent of the polynya formation depends on wind (Dunbar 1981:29), not temperature. This means that this spring’s polynya formation in the eastern Beaufort isn’t a symptom of global warming, it isn’t “missing polar bear habitat,” and it isn’t a sign of early sea ice breakup.

In fact, the Cape Bathurst polynya is a critical place for ringed seals and bearded seals to congregate in spring. Therefore, this is where many Southern Beaufort polar bears go to hunt. The presence of the polynya is especially crucial in years like this one, when very thick sea ice covers most of the Beaufort Sea.

Cape Bathurst polynya
A little-known edited volume published by the Canadian Wildlife Service almost 35 years ago (Stirling and Cleator 1981) outlined the state of Canada’s Arctic polynyas between 1975 and 1979, provided an overview of why these open water features are so important to the ecology of the Arctic. It provides some much-needed historical perspective on the area of open water that appeared this year in late April in the eastern Beaufort.

A paper by Smith and Rigby contains maps that show conditions as they developed in May 1975 (Fig. 1 above and Fig. 2 below). The ice data they had to work with at the time appear to have underestimated the extent of open water, as I discuss below, but the location and timing compare well with this year’s polynya.

Here is what Smith and Rigby (1981:24) had to say about the development of open water in eastern Beaufort in the spring:

“Some open water can be found in virtually all months somewhere in western Amundsen Gulf in the area of Cape Bathurst, Cape Parry, and Cape Kellet (Banks Island). Open water can appear as early as sometime in December, although it is not until April that a characteristic form to the polynya appears.

During each of the 5 years [of the study: 1975-1979] an open lead developed off the eastern side of Cape Bathurst sometime in January (Fig.14a). This coincided with the appearance of open water just north of Cape Parry in 4 of the 5 years. Open water remains in the general area, in some form, until late May to early June when, characteristically, the area between Cape Bathurst and Cape Kellett opens up to form a disintegration area. Until April, the size, shape, and location of open water is quite variable by month and by year (e. g. Fig. 14b). By April in most years, however, the polynya exhibits a more or less typical form (Fig. l4(c-f). With the advance of break-up, the open water between Cape Bathurst and Cape Kellett enlarges into Amundsen Gulf. In addition, open water develops northwards, along Banks Island, and westwards to Mackenzie Bay (see Fig. 14g. h). The extent to which the shorelead polynya system in the Beaufort Sea is open is mainly dependent upon wind since this influences the movement of the Arctic pack. The coast was open to Mackenzie Bay in all five summers, and as far west as Barter Island in three.” [my bold]

West of Cape Barrow polynya
It may surprise you to learn that there is also a patch of open water off the western end of the Alaska coast near Barrow, which shows up in the Beaufort Sea ice concentration map below (Fig. 2). That polynya is not unusual either.

Back in 1975, a polynya had formed west of Point Barrow as well. As researchers Smith and Rigby (1981:24) pointed out, based on records from the early 1970s, this polynya usually became prominent about this time of year:

“In contrast to the region discussed above, sizeable areas of open water rarely occur between Mackenzie Bay [mouth of the Mackenzie River] and Point Barrow for any length of lime during the winter. The lead along this part of the coast tends to remain closed. In the area west of Point Barrow, however, open water and new ice is evident in most months, but again, it does not become continuous and extensive until about mid May.

Break-up, which is characterized by progressive widening of the lead system, usually commences in mid June (except mid May in 1979). As break-up progresses, a narrow continuous lead develops along the whole coast from Cape Bathurst to Point Barrow, with the region between Mackenzie Bay and Point Barrow being the last to open.” [my bold]

And here is what marine mammal biologists Ian Stirling and colleagues had to say about polar bears and the Cape Bathurst polynya in spring (Stirling et al. 1981:49):

“Polar bears prey mainly upon ringed seals and, to a lesser degree, on bearded seals. Polar bears appear to be more abundant in polynya areas and along shoreleads, probably because the densities of seals are greater and they are more assessable. For example, between March and June in the Beaufort Sea from 1971 through 1975, 87% of the sightings of polar bears were made adjacent to floe edges or in unstable areas of 9/10 or 10/10 ice cover with intermittent patches of young ice.” [my bold]

Later, they discussed why these areas of open water can be so important in the Southern Beaufort area (Stirling et al. 1981:54):

“One useful approach is to ask what would happen if the polynya was not there? Obviously this is impossible to evaluate on an experimental basis, but by examining the consequences or natural seasonal variation, some useful insights can be gained. For example, the influence of rapidly changing ice conditions on the availability of open water, and consequently on populations of seals and polar bears, has been observed in the western Arctic. Apparently in response to severe ice conditions in the Beaufort Sea during winter 1973-74, and to a lesser degree in winter 1974-75, numbers of ringed and bearded seals dropped by about 50% and productivity by about 90%. Concomitantly, numbers and productivity of polar bears declined markedly because of the reduction in the abundance of their prey species. …If the shoreleads of the western Arctic or Hudson Bay ceased opening during winter and spring, the effect on marine mammals would be devastating.”[my bold]

In other words, Stirling and colleagues suggested in 1981 that the marked declines in ringed seal, bearded seal and polar bear numbers in the mid-1970s (discussed many times on this blog) was due primarily to the fact that the Cape Bathurst polynya did not develop as usual because thick ice conditions prevented it.

All in all, considering how much thick, multiyear ice there has been in the Southern Beaufort this year since early April (Figs. 3 and 4 below), it seems to me that polar bears are very lucky that the Cape Bathurst polynya developed a bit earlier than usual this year.

Figure 3. Ice thickness map from the Naval Research Laboratory for 14 May 2015.

Watch the ice thickness conditions develop over the winter in the NRL animation below, remembering that green, yellow, red, and black show multiyear ice (from the Naval Research Laboratory ):

Sea ice coverage as a proxy for polynya size
The Canadian Ice Service (CIS) weekly graphs for historical ice coverage in the Beaufort Sea (Fig. 5, below) show that sea ice this year is slightly below average for this date (14 May) but not as low as virtually every year from 1968 to 1979 (only 1968 and 1974 had average ice levels).

Without polynyas and extensive shoreleads, the Beaufort Sea is nearly 100% ice covered in late winter and spring. When ice coverage is not close to 100% at this time of year, it indicates not only the presence of polynyas, but their relative size.

Take a look at the value for 1975 in Fig 5 (below), the year the Smith and Rigby maps featured in Figs. 1 and 2 were constructed (using different sea ice data). CIS attributes 1975 with an ice coverage of about 86-87%, well below the level seen this year, which has about 93% ice coverage. That suggests to me that the 1975 polynya may have been as large as this year’s, or even larger. 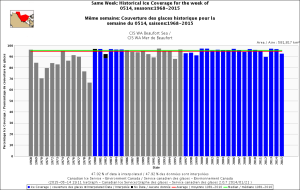 Conclusion
The areas of open water in the eastern Beaufort and west of Point Barrow that are obvious in Beaufort Sea ice maps for early to mid-May are not unusual, not as large as they have been in the past, and are beneficial to polar bears and their prey. Given the amount of thick, multiyear ice present along the north slope of Alaska and in the offshore region, polar bears are very lucky that these polynyas developed when they did.

Pdf of pertinent excerpts of above papers here.