Posted on May 23, 2021 | Comments Off on Spring polynyas in the Arctic then and now as feeding areas for hungry polar bears

Patches of open water in the Arctic that develop in the spring, including polynyas and widening shore leads, are largely due to the actions of wind and currents on mobile pack ice rather than ice melt. Contrary to concerns expressed about possible negative implications of these early patches of open water, these areas have always been critical congregation areas for Arctic seals and are therefore important feeding areas for polar bears in late spring.

END_OF_DOCUMENT_TOKEN_TO_BE_REPLACED

Posted on June 3, 2015 | Comments Off on Tracking polar bears in the Southern Beaufort May 2015 – thick ice and polynyas

Polar bear habitat in the Southern Beaufort for May 2015 was a contrast between the development of recurring polynyas (patches of open water) and tremendously thick sea ice. So it’s interesting to see where the polar bears tagged by USGS biologists chose to hang out. 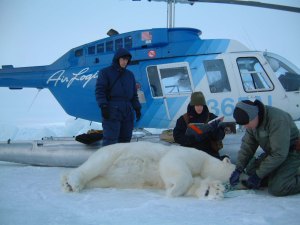 The total number of bears being tracked in May – 23 – is down markedly from the 30 bears USGS biologists started with in April.

Most of the collared bears were concentrated in May along the shore lead (crack of open water) that normally develops between the shorefast ice and the pack ice offshore. That’s especially understandable this year, since most of that pack ice is 3-5 m thick (10-16 ft) – see the maps below.
END_OF_DOCUMENT_TOKEN_TO_BE_REPLACED