Winds blew a huge mass of new shorefast sea ice way out into Western Hudson Bay a few days ago (13 November) and very likely took some polar bears with it. This offshore wind phenomenon is common at this time of year – it happened in 2017 – and is often part of the yearly ‘freeze-up’ process for sea ice. But the extent of ice and the distance blown offshore in Hudson Bay this year is impressive. 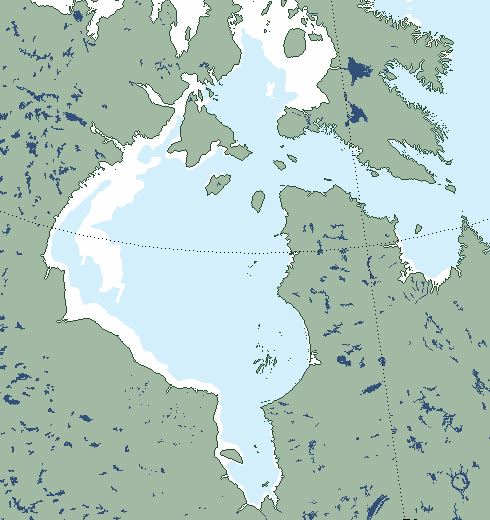 In previous years, this has happened very early in the freeze-up sequence, well before the ice was thick enough to support polar bears. This year is different: freeze-up was early (starting in late October) and the ice was thick enough off Western Hudson Bay to support bears hunting successfully for seals by the last day of October. By 7 November, most bears had left for the ice, with only a few stragglers left behind – since they were all in good condition due to a late breakup of the ice this summer, there were remarkably few problem with bears in Churchill and some seemed in no hurry to leave once the shorefast ice started to form.

It’s doubtful that any bears out on that wind-blown ice are in any kind of peril. As long as the ice is thick enough to support their weight, they should be fine – and keeping themselves busy catching seals.

The chart above is from NSIDC Masie for 15 November 2020 (Day 320) – it showed the same large offshore patch of ice the day before. However, only today did the Canadian Ice Service (CIS) chart show even part of the offshore patch (below):

In this case, I’m trusting the Masie chart because it seems the CIS sensors aren’t yet set to pick up ice that’s far offshore, as the detailed stage of development chart for 16 November (below) shows (grey-white ice is 15-30 cm thick, grey ice is 10-15 cm, but see discussion below):

However, after I’d almost given up that we’d hear from Andrew Derocher about his polar bears with still-functioning collars, he posted a tracking map late today (below). Even his chart shows that big patch of offshore ice but he didn’t comment on it at all. It appears that of the 9 collars he deployed on females last year only one is on the ice, well offshore (north of Churchill).

Despite no new polar bear collars deployed this year, we have a few that should continue through the coming months. Only 1 of 9 bears has ventured offshore onto very thin sea ice. The rest of the bears are still waiting onshore. No early freeze-up but it's not late (yet). pic.twitter.com/kS9NmE8rTJ

Derocher is still claiming that this is not an early freeze-up year even though it’s clear many bears have already left for the ice and only a few stragglers remain, including most of his collared bears. However, some of his bears are probably pregnant (especially the two furthest inland) and won’t be going anywhere this fall. And we already know that many of Derocher’s collared bears were very late to come onshore in August and having only spent 3 months onshore rather than 4 or 5 months they are used to, may now be in no hurry to leave – especially since they know that seals are to be had out on that ‘very thin’ ice just offshore.

Unfortunately, the Polar Bear Alert Program in Churchill decided not to issue a report for the first week in November (2-8 Nov), so there is no information on the progress of freeze-up and polar bear movements from that authority. There might be one issued tomorrow for the second week (9-15 Nov), if so I’ll post it here.

It’s important to know that even big male bears only need ice that’s about 30 cm thick to hold their weight. And while the newly formed grey ice is technically only 10-15 cm (see the stage of development chart above), the ice offshore this year is very compressed and buckled (see below from 7 November), making it thicker than it might appear on the official ice charts. 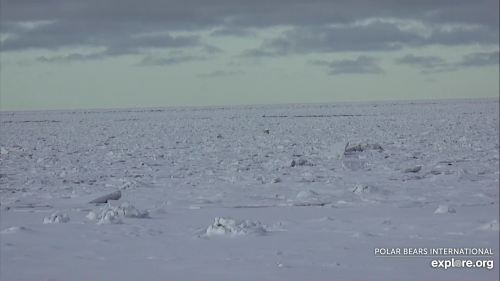 Shot during the 2015 Arctic GEOTRACES expedition aboard the U.S. Coast Guard Cutter Healy. The lack of narrated misinformation makes this video suitable for young children.

This looks to be a different bear than the one I discussed in 2015 here but was undoubtedly taken on the same cruise, because reports at the time (August 2015) said that ‘several’ bears were spotted. Video attributed to ‘Bill Schmoker, PolarTrek teacher 2015’, launched on the Woods Hole Youtube channel 1 April 2020 (no other info provided).

END_OF_DOCUMENT_TOKEN_TO_BE_REPLACED

Posted on December 21, 2019 | Comments Off on Polar bear cubs play on the thin ice that supposedly threatens them with extinction

This video tweet deserves a post of its own: two relatively inexperienced cubs-of-the-year in Russia deliberately break through thin ice, fall into the icy water and crawl back out – over and over again, for fun, as their mother watches in the background. Play is one way animals learn important survival lessons and for polar bears, this is one of them:

Bear cubs play around on ice in Russia pic.twitter.com/RhMfpV0JFJ

Thin ice was a natural component of the Arctic long before polar bears evolved to live there: it is nothing new but dealing with it requires a strategy that cubs must learn.

END_OF_DOCUMENT_TOKEN_TO_BE_REPLACED

Posted on July 29, 2019 | Comments Off on Shockingly thick first year ice between Barents Sea and the North Pole in mid-July

In late June, one of the most powerful icebreakers in the world encountered such extraordinarily thick ice on-route to the North Pole (with a polar bear specialist and deep-pocketed, Attenborough-class tourists onboard) that it took a day and a half longer than expected to get there. A few weeks later, in mid-July, a Norwegian icebreaker also bound for the North Pole (with scientific researchers on board) was forced to turn back north of Svalbard when it unexpectedly encountered impenetrable pack ice. 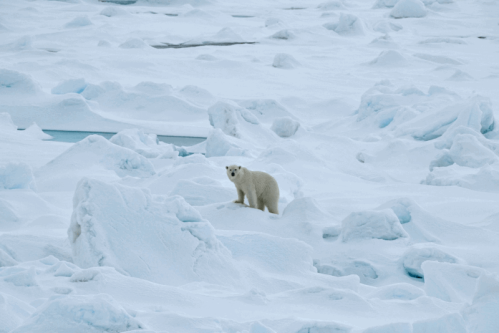 A polar bear on hummocked sea ice in Franz Josef Land. Photo by Michael Hambrey, date not specified but estimated based on tour dates to be 22 or 23 June 2019.

Apparently, the ice charts the Norwegian captain consulted showed ‘first year ice‘ – ice that formed the previous fall, defined as less than 2 m thick (6.6 ft) – which is often much broken up by early summer. However, what he and his Russian colleague came up against was consolidated first year pack ice up to 3 m thick (about 10 ft). Such thick first year ice was not just unexpected but by definition, should have been impossible.

Ice charts for the last few years that estimate actual ice thickness (rather than age) show ice >2 m thick east and/or just north of Svalbard and around the North Poie is not unusual at this time of year.  This suggests that the propensity of navigational charts to use ice ‘age’ (e.g. first year vs. multi-year) to describe ice conditions could explain the Norwegian captain getting caught off-guard by exceptionally thick first year ice. It also provides an explanation for why the polar bear specialist onboard the Russian icebreaker later failed to explain that first year ice of such shocking thickness was truly extraordinary, not just a bit thicker than usual.

END_OF_DOCUMENT_TOKEN_TO_BE_REPLACED

Posted on August 20, 2015 | Comments Off on Summer habitat for most polar bears is either shoreline or sea ice in the Arctic Basin

At this time of year, sea ice extent numbers are meaningless for polar bears.  The extreme low September minimum of 2012 – when masses of polar bears didn’t die – showed rational people that this is true. Even the low 2007 summer extent, which hit earlier in the season than 2012, had little to no negative impact. 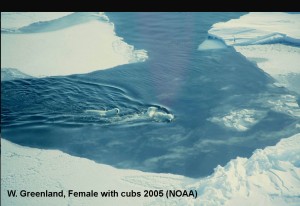 In late summer, bears outside the Canadian Archipelago either retreat to shore or stay on the sea ice as it retreats north into the Arctic Basin (see image below, click to enlarge).  Most bears in the Archipelago have ice year round, so life doesn’t change much. This means that it does not matter to polar bears how much area the Arctic Basin ice covers in September – for their needs, 1.0 mkm2 would be plenty. 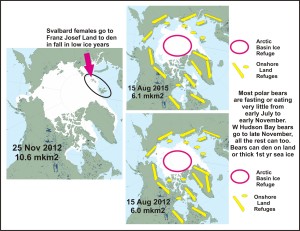 Still, Southern Hudson Bay polar bears had extended hunting opportunities in July this year (whether or not they hunted successfully) and for this date, Hudson Bay had more ice remaining than any year on record. Yes, more than even 1992 but only by a few percent. See charts and maps below.

END_OF_DOCUMENT_TOKEN_TO_BE_REPLACED

Recently, several polar bear biologists have teamed up with photographers to get pictures of starving bears into the scientific literature – and picked up by the media, with mixed results. 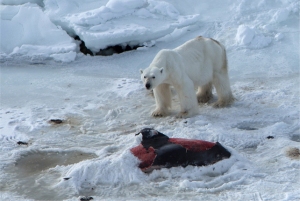 His Norwegian colleagues Jon Aars and Magnus Andersen have just done the same with a bear caught eating a white-beaked dolphin (photo above) – but this time the media took the bait.