The Sun ran a photo-essay yesterday (22 March 2020, below) taken by a UK photographer who went to Wapusk National Park just south of Churchill, Manitoba in order to get much-coveted images of polar bear mothers and cubs newly emerged from winter maternity dens. The photos were said to have been taken “early last week” (16-17 March?). 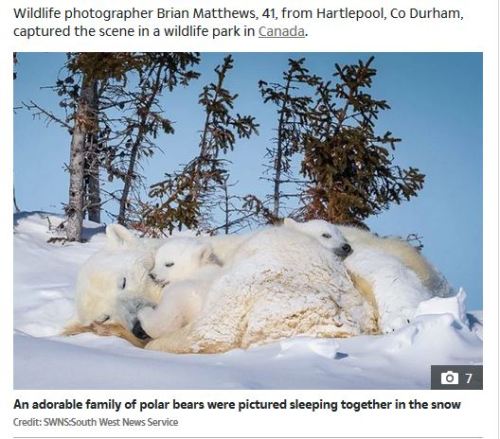 The trees in the photos are a give-away to the location: no other subpopulation regions except Western and Southern Hudson Bay are below the treeline. Scrubby little spruces but ‘trees’ nonetheless. Mothers in more northern regions won’t come out with their cubs until April.

The question is: what was this photographer thinking to travel to a remote Arctic location in the middle of a global pandemic?

UPDATE 24 March 2020 820am PT. I have just heard from photographer Brian Mathews and he had this to say about his trip to Wapusk National Park:

“Context and facts are key as ever. I left the U.K. before any of the measures where in place. I’ve just got back after being in Canada for nearly a month. When I returned to Churchill I self isolated then returned to the U.K. the coverage I got is good for the bears and the positive uplifting feedback I’ve had about the joy they brought into people lives had be brilliant.”

I noted in my response to him that I realize the tour company in Canada bears some responsibility for continuing to operate under the circumstances.

END_OF_DOCUMENT_TOKEN_TO_BE_REPLACED

Posted on July 28, 2019 | Comments Off on RCMP on manhunt spot a fat polar bear far from the coast of Western Hudson Bay

In the course of a manhunt for two murder suspects wanted in British Columbia, Royal Canadian Mounted Police posted a photo of a fat polar bear they spotted about 200 km north of Gillam, Manitoba. 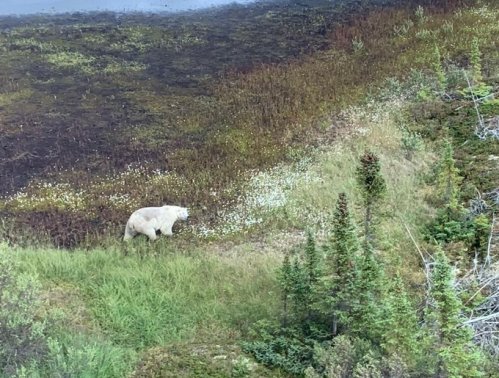 This fat bear – as would any others that might be spotted in the area – is a pregnant female from the Western Hudson Bay subpopulation intent on finding a secure place to dig a den in the permafrost where she can stay cool over the summer and give birth this winter.

However, true to form, The Guardian (28 July 2019) ludicrously suggests those on the hunt for the murder suspects are now at risk of a polar bear attack:

The threat of a polar bear attack has become a reality for the huge Canadian police and military contingent searching for the teenage duo suspected of shooting dead Australian tourist Lucas Fowler, his US girlfriend and a university botanist.

END_OF_DOCUMENT_TOKEN_TO_BE_REPLACED

Posted on May 29, 2017 | Comments Off on Polar bear counts for W Hudson Bay: ‘core’ area numbers are not comparable

Polar bear population estimates for Western Hudson Bay have recently become contentious because one specialist has been making statements that confuse the issue. As we all wait for the release of the report on the WHB aerial survey of 2016, it’s worth going over the recent history of these counts and what they have revealed. 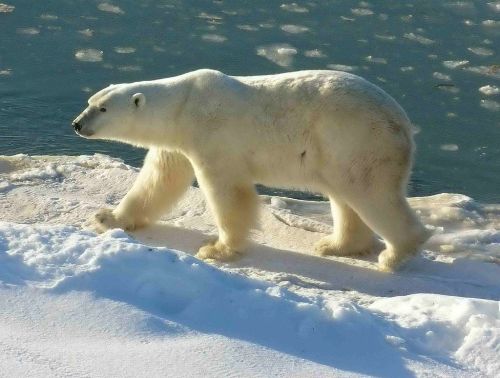 The official count for bears in WHB (used by the IUCN Polar Bear Specialist Group, the IUCN Red List, and Environment Canada) is 1030, based on an aerial survey of the entire region conducted in 2011 (Stapleton et al. 2014).

Since last year, Andrew Derocher (University of Alberta) has been telling any media pundit who will listen that WHB polar bears have declined from about 1200 bears in the 1980s to only 800 or so bears today (one example here) — a statement that is clearly not true.  In recent months, however, whether due to complaints from the public or from his colleagues, he’s qualified that statement by saying it’s the number of bears in the “core” area of WHB that has declined.

But is Derocher’s revised statement a clear scientific interpretation of the facts? Have a look at the details below and see if you come to the same decision I have: that it’s not possible to compare WHB ‘core’ area polar bear population estimates over time.

END_OF_DOCUMENT_TOKEN_TO_BE_REPLACED

Comments Off on Polar bear counts for W Hudson Bay: ‘core’ area numbers are not comparable

Last week, among other events, the first fat polar bear of the season was photographed on shore in Western Hudson Bay, a fat bear was run out of town in South Greenland, and media outlets spread misinformation – apparently preferring global warming hype to rational facts.

1) First polar bears have been seen onshore in Western Hudson Bay in Wapusk National Park near Cape Churchill (map below) on 18 June this year, apparently fat and well prepared for the summer fast. My informants tell me a few bears usually come ashore in June near Churchill before ice conditions make this necessary; the bulk of the population will probably continue seal hunting for a few more weeks. Those bears will come ashore along the southwest coast (near Polar Bear Provincial Park, in Ontario, see Fig. 2 below). They’ll make their way north to the Churchill area in time for freeze-up in the fall. Watch one fat bear caught on camera on 18 June, below :

2) Fat polar bear spotted in Nanortalik, Southern Greenland 18 June 2015, a bit further south than usual. People from the community drove it away, but not before taking lots of pictures. 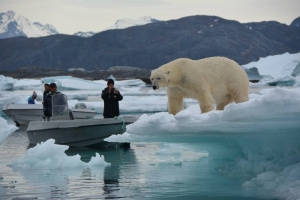 Some very cool photos, including the one above (taken by Henrik Hansen), worth a look. This bear was in excellent condition, well prepared for the summer fast ahead, whether he ends up spending it on shore somewhere (but not near this community!) or on the sea ice further north in SE Greenland (Fig. 1 below). The ice in that areas is probably broken up (~15-30% concentration) but this is enough for the bear to swim from flow to flow to make it’s way up the northeast coast where most East Greenland bears spend the summer.
END_OF_DOCUMENT_TOKEN_TO_BE_REPLACED

Posted on November 11, 2014 | Comments Off on A more optimistic view of Churchill polar bears and Hudson Bay freeze-up

Over the last few weeks, biologists Andrew Derocher and Steve Amstrup have been repeating their tired old tales of doom and gloom about the polar bears around Churchill and I’ve done my best to refute the worst of their nonsense. 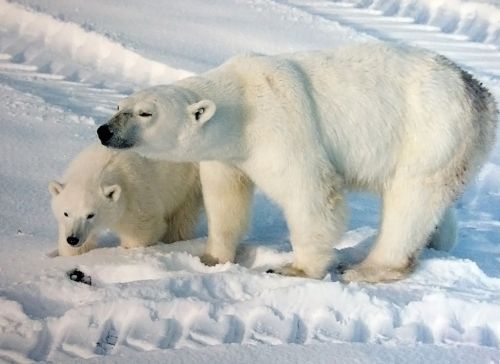 To that effort we can now add this report from PolarBearAlley, where Kelsey Eliasson has posted a good-news story about the bears of Cape Churchill and the progress of freeze-up, including sightings of a number of mothers with cubs.
END_OF_DOCUMENT_TOKEN_TO_BE_REPLACED

“Our results suggest that mark–recapture estimates may have been negatively biased due to limited spatial sampling. We observed large numbers of bears summering in southeastern WH, an area not regularly sampled by mark–recapture.” Stapleton et al. 2014. 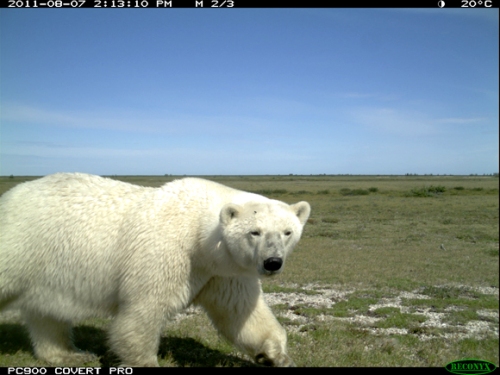 We’ve seen the results of this 2011 study before, in government report format. But now it’s been revamped, peer-reviewed and published in a respected scientific journal – it actually came out in February, without fanfare, but I’ve only just come across it.

Some excerpts below, with conclusions that should raise some eyebrows.

END_OF_DOCUMENT_TOKEN_TO_BE_REPLACED

In the last few days, ice coverage on Western Hudson Bay finally dropped below the 30% level that now defines ‘breakup’ for polar bears: a few bears near Churchill started to come ashore late last week but most will stay on the ice until the end of July. That means breakup this year was unofficially July 8th, a week later than average (July 1) for the third year in a row.

Don’t’ tell that to the folks at Polar Bears International, though, because they’re busy telling people that the ice-free season for Western Hudson Bay bears is now longer than it was before the 1990s. What they mean is that the overall trend is toward early breakup dates.

But what they don’t admit is that over the last 44 years, breakup was a full two weeks earlier than average for Western Hudson Bay only six times and only three of those early breakups occurred within the last 13 years. See the calculations below and see what you think.