Posted on March 28, 2016 | Comments Off on 2016 record low maximum will make headlines but unlikely to affect polar bears

Never mind that the sea ice maximum this year came almost a month later than last year (and close to latest since 1979) – and was lower by only .02 – the US National Sea Ice Data Center (NSIDC) today trumpeted a new record low.  What this means to polar bears, if anything, remains to be seen.

[The difference in area? Smaller than the Islands of the Bahamas]

The average date for maximum extent is March 12.

Clearly, there was plenty enough sea ice in the spring of those years for most polar bears to hunt seals successfully and put on the weight they needed to survive the summer fast ahead. I see no reason to expect 2016 to be different.

END_OF_DOCUMENT_TOKEN_TO_BE_REPLACED

Sea ice looks low for this time of year but how does it compare to 2007, when summer ice habitat for polar bears hit a record-breaking low?  What can the impact of 2007 ice levels on polar bears tell us about what to expect this year?

By this date in 2007 (8 August, Day 220, NSIDC Masie map below), there was almost 1 million km2 less ice than there is this year (map above). However, look which polar bear subpopulations not only survived, but thrived, through the 2007 low ice summer: Chukchi Sea, Southern Beaufort, Barents Sea, Davis Strait, Foxe Basin, Western Hudson Bay, and Southern Hudson Bay. That’s all of the subpopulations for which we have recent data.

This means if less summer ice for a longer period of time impacts polar bear health and survival, conditions in 2007 should have had a noticeable impact on polar bears around the world. They didn’t. That suggests even if this September sea ice minimum is as low as 2007, it won’t have any negative impact on polar bear health or survival. The most profoundly negative documented impacts have come from thick sea ice in spring or  suboptimal spring snow levels (Crockford 2015) and the evidence shows that variation in the extent of summer ice is simply irrelevant to polar bears. 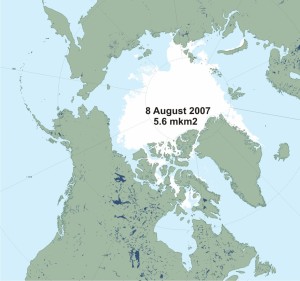 END_OF_DOCUMENT_TOKEN_TO_BE_REPLACED

Sixteen females with satellite collars plus one with a glue-on transmitter – down from 17 with collars and 6 with tags last month – all out on the ice during the month of June 2015.

Polar bears were captured by USGS biologists in 2014 and 2015 on the spring-time sea ice of the southern Beaufort Sea. The glue-on tags don’t seem to be holding up very well, with only one remaining out of the original eight deployed this spring.
END_OF_DOCUMENT_TOKEN_TO_BE_REPLACED